I know, I know. Impossible, right?
Well this is something I began looking up on a few weeks ago as my sister convinced me to move my exercise routine from the gym on the elliptical to the outdoors on a trail.
Now I know running can be daunting, and it can continue to be so long as you live whether you are a couch potato, a moderately active person, or even a marathon runner... but guess what?

You don't know how to run.

No, really. You don't know how to run, and this is why: no one has ever told you how!

Thankfully we don't have to figure out how to do all of that ourselves. Some crazy old man did it already! Russian scientist Nicholas Romanov invented the Pose Method of running to improve performance of the Olympic athletes he coached. People claim that running is infinitely easier when adopting this technique which allows them to not only experience less pain but to also run faster and for longer periods. Most people use a heel-to-toe method and they are working themselves too hard!

The pose is pretty simple- but a bit difficult to articulately explain.
To assume the position:
1. stand straight up (just to begin :))
2. slightly bend your knees
3. stand on the balls of your feet (contact of heels to the ground slows you down and causes too much pressure) DO NOT shift weight onto the toes.
4. lean forward at the waist until almost falling over (to provide forward motion)
5. Flick one foot up at a time toward the buttocks using your hamstrings.
DO NOT kick your feet up hard, as they should naturally raise with little effort
DO NOT ever let your feet cross the imaginary line from your head to the ground 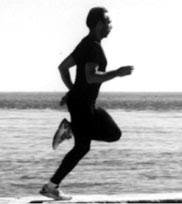 Think of this as almost like how a fish would swim (okay that is totally awful example) You are not using the motion of your legs to cause you to move forward, but rather the angle of your body. The more you lean, the faster you will travel, employing gravity to do some of the work for you. The legs merely serve as a sort of automatic propeller. This form is seen all throughout nature, including in the cheetah and I mean hey, they are pretty fast.
For more info google it, lazy.

Okay so that was the more scientific portion of the post, now for the ridiculous aspect. Fun running tips (some of which are weird and debatably boring)
1. Run with music.. duh
2. Count all of your steps: for the math obsessed
3. Try to run without touching shadows
4. Try to make your whole trip without letting anyone see you: for the spy movie enthusiast
5. Run with a friend or a dog
6. Run to a destination like a pool
7. Try not to run in the same place twice
8. If you live somewhere awesome take a run by the landmarks (I live in DC during the school year and am looking forward to running around the reflection pool at the Washington monument and to running through the National Zoo!)
9. Run to somewhere where there is a reward and then WALK back home, releasing lovely endorphins
10. Sing! It is great for your lungs and is a fun distraction. Also it is great training to prepare for a vocal show
11. Hop, then skip, then run backwards, run sideways, do walking lunges, and repeat.
12. Try to beat your personal best
13. Run with someone attractive, it can be quite the motivator.
14. Run for a cause! 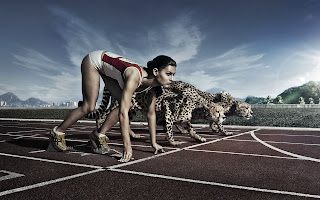