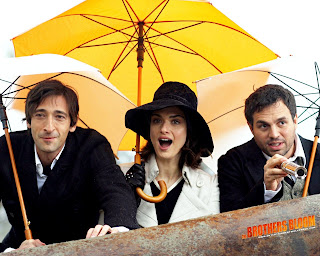 Dear reader, go see The Brothers Bloom (Rian Johnson, 2009)
I went and saw this last week with my sister at her request, and didn't have time to go look up IMDB and check out the specs, and was pleasantly surprised.

I wouldn't call myself a movie snob by any means, I don't wrinkle my nose at going to a movie like Twilight for the pure mindless entertainment, and I am an avid lover of Cane Toads (best documentary ever made). But I will have my degree in film in a few years, and that gives me at least an ounce of credibility, right? I have seen hundreds of films, but I still get all worked up about going to the cinema or renting a movie (or *other* methods) and I think loving it is what really gives me any right to judge them.

I promise not to say too much; I tent to get over excited about things like this. I'm not going to give you a plot synopsis per se, but here is the general idea: Two orphaned brothers Bloom (Adrien Brody) and Stephen (Mark Ruffalo) discover at an early age they have a knack for conning their way to whatever goal they desire. The older designs the elaborate plots whereas the younger (Bloom) seems to do more of the legwork. We see early on that living their life creating relationships is both very isolating and seems to weigh heavily on Bloom. Cut to them grown and experienced with Bloom wanting to get out of his lifestyle. Along with their acquired sidekick Bang Bang (Rinko Kikuchi), a silent Japanese explosives expert, the brothers embark on their last con of an eccentric lonely young millionairess (Rachel Weisz). Enter the love story. I will say no more. 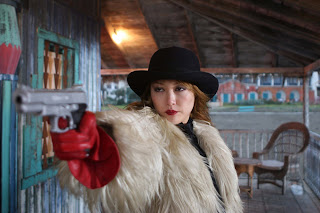 What is great about this movie is it is entirely unpredictable, as you are constantly trying to decide what is a con and what is real, and asking the question "Does it really matter?" We see some great devices throughout, some slapstick comedy, Brechtian distancing paired with ironic results, and the use of symbolism is present but not overwhelming.

Now this might sound pretentious: I absolutely adore the integration of some classic Russian cinematic moments, and they were nicely paired with the whole idea of the Russian novel being similar to the cons, the references to the Russian mobsters for the big finish, and the crazy cameo by Maximilian Schel (who I swore was Sean Connery the whole time!).
The characters are the real beauty here though. They pull you in and you actually like them, as unbelievable as they would seem in the real world. Bang Bang was superb despite only saying three words the whole film, notably: "Campari". 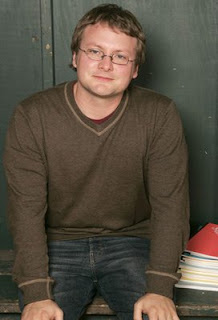 I hate to say "I laughed, I cried", but yes I certainly laughed and had to fight back tears at one point, shh don't tell. Go see it. You will enjoy it immensely even if you know jack squat about film, and will love it even more if you do. I expect good things from Rian Johnson who has only directed one other film (Brick in 2005) and has had pretty solid positive critiques, and he's only 35 so I imagine there will be a lot more coming from him.
Posted by Gigi Galdo at 1:39 PM