Here we see what can only be described as moronic... or entirely hardcore (it is a very thin line to walk). 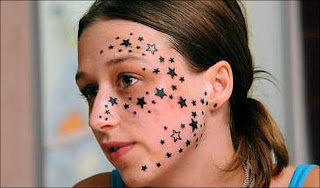 Kimberley Vlaminck, 18, hails from Belgium, the land of three languages... which is perhaps what led to the 56 trampstamps displayed on her face. This loverly art (?) cost Kimberly € 50, but the possibly drunken desiscion might cost the artist, Rouslan Toumaniantz, about €10,650.
Kimberley here says she fell asleep after requesting 3 (three... TROIS) stars near her eye, and awoke to... well, this. Now this accusation begs a few questions immediately, as in: How do you fall asleep when your FACE is being jabbed with a needle repeatedly??? Obviously if in fact the teen was unconscious as she claims, she was likely either drunk or high on some sort of substance.
Meanwhile Toumaniantz is not having any of this! He maintains that the girl REQUESTED this. He claims Kimberley was very pleased with his work until after encountering her father and boyfriend, who were just not too pleased with the addition of a constellation to the face of their pride n joy. Diego Vlaminck even went so far as to say that Toumaniantz hypnotized his poor daughter, who only wanted a tattoo so as to continue on the tradition of tattoos in her family, which is of course why Diego was paying for the ink. 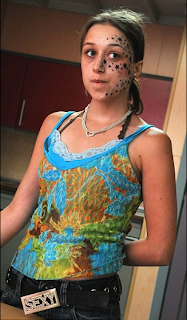 Toumaniantz assures he did not hypnotize the girl, and certainly could never have tattooed so many stars in such a sensative area without the girl's compliance. The only other possible probem which could have led to the law suit is simple misscomunication. While Kim speaks both Dutch and French, she says the tattoo artsis only spoke fractured English and French... no word yet on what his native tongue is, but his cadance in his intervies seems perfect!
He says Kim "was awake and looked into the mirror several times as the proceedure was taking place." But the girl says her life has been ruined, and she feels like a circus freak. boo hoo. The laser removal she is suing for certainly won't remove everything. Maybe I'm being a bit harsh, but concidering I am more prone to belive the artist in this one, I think the chick needs to learn to own it. In more conservative situations she can always just cover it up with an opaque base makeup. Although if her story is true and I was her, the claimed damages would be a little higher.

Well either way I suppose Kimberley got exactly what she wanted... if you look at the shape, the tattoo is technically a 3 Star Tattoo...
Posted by Gigi Galdo at 2:24 PM