So being a lover of most things technological and geeky, as well as being a student in the modern world, I spend a lot of time online. Now there are certainly drawbacks to the internet, some which are obvious and direct and some subtle and indirect like let's say, having no social life in the real world (or the rw as they say). Since internet has existed the need to make money off of it has also existed. Today as the idea of free information takes over, the use of advertisements has become a primary method of sites with heavy traffic to create profit. Ads on the internet have honestly become less invasive over the years, with sites using subtler integration (such as inlaid background images) and less annoying popup windows with seisure inducing graphics and peircing noises.
However this doesn't mean everyone is still all hunkydory with seeing ugly blocky graphics and text- we want something aesthetically pleasing! Well now thanks to American artist Steve Lambert, us Firefox users can experience less ads and more art with a free ad-on called Add-Art (http://add-art.org/). This thing is neat-o. You just install it, and it will automatically replace ads with artwork, AND I think about every two weeks new art is cycled in. Some of the art is cute animation, some is warped still life, odd photography, classic images... I really haven't had it longer than two months, so that is the extent of how many genres I can honestly claim it has. 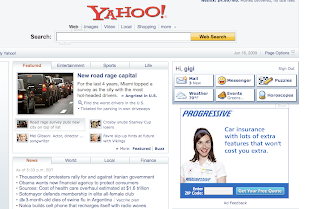 Here is my Yahoo home before with a big Progressive ad, staring at me. 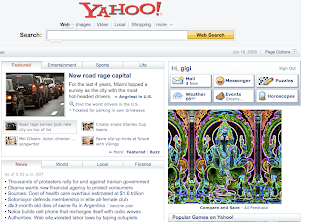 And here is a screenshot of my Yahoo home after addart, with some crazy Ganesha in neon.


Right now they have been using modified religious imagery and old timey looking book drawings. It always changes.
BUT some people mights find the app alightly annoying if only because it doesn't automatically block everything. Here is the demo from the website:

Some items it will replace, no problem, but sometimes the ads are still there and you have to click a little button on it's corner that saus block. Although that might just be me not bothering to mess around with the settings! But it doesn't bother me to have to do that.
The app also doesn't block pop-ups, but most people have something which already does that.
Lambert also makes another clever addon called Self-Control (http://visitsteve.com/work/selfcontrol/) which can bar you from checking your e-mail or other addictive techno innovation for a set time. This is of course something I could never have enough self-control to do, but I think many probably need :)

So anyway props to Steve, he has cauhgt my attention by playing in to my obsessive techno-joy. Maybe I'll spend an unhealthy amount of time browsing his site!
Posted by Gigi Galdo at 5:10 PM