So who remembers Superman Returns? Or maybe X2?
Questions, questions, I know.
Okay granted they are decent movies with high budgets. I mean hey, its hard to pull off a comic book character and story line, especially popular ones which have had prior media adaptations (Cartoons, live action series, not to mention wildly popular films released in a Hollywood era of "greater

integrity"). Still neither of these movies -which grossed pretty high profits for sequels- are that perfect combination of mass appeal and fanboy accuracy. Unless that is, I suppose, if equate cheap melodramatic symbolism and gaping plot holes with the rustic feel of a comic book. Or unless perhaps you consider the awkward and unnecessary use of CGI and big flashy explosions and action sequences as the mark of true poetic filmography. I know I'm being harsh. Entertainment value wise I have to say I remember watching both of these films and enjoying them and even getting that fanboy(girl?) feeling of glee experiencing the overwhelming psychological thrill of American superhero personal association. But this does NOT a good movie make.
And so Harris fades from my memory.
UNTIL dun dun dun,
I saw Into the Wild... which was not directed or written by Harris, but did have Emile Hirsch, who I came to have a great affinity toward in a span of two hours. A few quick clicks on IMDB and badabingbadaboom nestled between his rise to major motion picture stardom and his bit roles in TV movies and series, was DAN FRICKEN HARRIS. suck it! Imaginary Heroes
"Okay, curious" I thought to myself. Click. 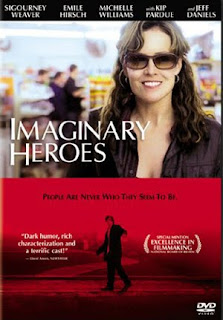 Sigourney Weaver! wait, what?!!
That dude who looks exactly like the annoying guy on Full House?!!? (Jeff Daniels)
Michelle Williams. omg Ledger's girl (who at the time was still alive)
Wait a second, Kip Pardue, what are you doing here? Somehow the name had stuck out in my mind from Remember the Titans,
Deirdre O'Connell, Ryan Donowho, Jay Paulson, the list goes on.. I AM INTRIGUED!
So I immediately put the film on my parents' Netflix queue, (which they hated when I did that), received, put in DVD player, and voila, I found one of my favorite films.

The story revolves around the Travis family, with Hirsch's character, Tim, serving as the sometimes narrator. We begin with quite the event: the older brother Matt, who is a shoo-in for the Olympic team in swimming, shoots himself. And the movie follows. Of course this is no "lets cry and be depressing and boring" movie, there are twists, deep and interesting characters, problems, frustrations, just people. Really, really, screwed up, and normal people. Weaver as the mother Sandy, Oh so delightful. Entiely beaten up by losing a child and finding all her relationships crumbling around her. She is so likable and entirely the perfect mother... well except for, eh watch the movie. Daniels is the perfect overbearing stage-dad, who is obsessed with his son's swimming career, some great psychological interworkings which come together (for so many reasons) in the end. Tim and his sister Penny deal with their own grief and their parents', while trying to carry on in some sort of vein of normalcy. I don't want to give too much, so watch it yourself. 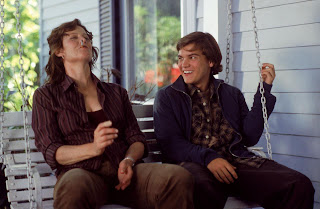 Perhaps my initial connection can be attributed to the somewhat macabre temperament of a girl on the precipice of being shoved into society, still being molded in the scalding fire of first experiences but having left the pubescent hormone-surge excitement. A first true depression. The period of an incredibly dry face of a disenfranchised youth. Poetic shit, you know. But the movie still gets to me, and anyone I have shown it to, no matter the age, is so effected. That is another great thing, you can keep watching the film without getting bored and tired.
Death, drugs, guilt, retribution, sex, et cetera, the normal things, they are all here. Rarely could a character (Tim) of such emotional turmoil stand so solidly, without begging for ridicule. He is just so specific, such a person, it is wonderful!
A dark comedy, nearly a perfect one at that.
I'm not quite sure what inspired me to write this entry considering it has been a solid six months since my last viewing of the movie, but the fact that even with that sort of distance such vivid moments of poignancy and comedic beauteousness are easily brought to mind says quite a bit about the film. The Christmas party scene, hilarious! Very simple things will make you fall in love with the characters, such as the Sandy finding Tim's pot and smoking it herself, taking great glee in sort of assuming this different persona as she goes out for rolling papers, and then being hit on by a college student.
The writing, the dialogue, the acting, the execution, the mood set up by music, lighting and camera, so great. So who knew? Dan Harris is an awesome writer/director, and in this case his heroes and totally super. (I like ending on corny jokes)
PS. I entirely forgot, but hey, this is the title of my blog, I KNOW.
Posted by Gigi Galdo at 11:10 AM